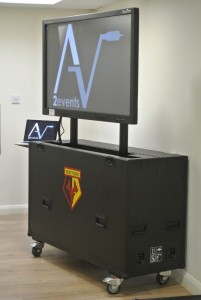 For over a year now AV2events have delivered the interactive technologies that have graced the grounds at Watford FC, an instrumental and highly valuable addition to the team’s development has been the Promethean ActivPanel, an unprecedented training aid, proving unparalleled when coaching the team.

Since the beginning of season 2014/15 Watford FC have won a total of 32 games, 27 of which gaining them a well earned promotion to the English Premier League.  It is perhaps no coincidence that during this period the Hornets have invested in several Promethean ActivPanels both at their training ground and home ground, a small addition you may say, yet these small addition as any Sports Scientist will tell you are imperative towards the marginal gains and the all important 1% improvement which can often be the difference between winning and loosing.

Fortunately for Watford, this ‘small addition’  proves a huge advantage when it comes to team training and development,  a far cry from of a large chunk of the competition, often still found coaching using technologies more synonymous to the days of Graham Taylor.

Using the ActivPanel the team coaches can now annotate, manipulate and retrieve historical data from past games that once had a place only on the front of the now inutile, paper flip charts and drywipe board.

These days a smooth transition now takes place from the training ground to the changing room. Play can be discussed in realtime, fuelling the team to react more effectively to the valuable half time talks where the weaknesses of the oppositon can be replayed and exposed right before the team on the ActivPanel, this invaluable feedback can then be applied immediately towards changing the course of the second half. Set pieces can be instantly discussed and drawn up during match time, interactively displaying a true representation of the mechanics and positioning of players as a virtual depiction in advance of the real thing. And it doesn’t end there, this captured data can then be reintroduced post-match, analysed and fed back to the team, players can now collaborate with the coaching staff in a technically advanced environment and the results speak for themselves.

Giving credence to the value these displays are now having on the club, Watford’s intention was to utilise the same quality training and coaching aide they have come to love away from the comforts of their home ground at Vicarage Lane.

While this initially appeared straightforward, it came with a major challenge – the flightcase needed to be completed within two weeks ready for their away game against Aston Villa.  A rapid response and deployment was therefore essential, and while being cost effective, the solution had to look extremely professional and contemporary, befitting the Club’s image. For peace of mind, the Club also demanded an advanced 5 year warranty option. With these requirements in mind, AV2events called on the support of their manufacturing partners and stepped up to challenge, delivering a custom flight case solution delivered ready for battle at their next away game.

The result was a purpose built portable flightcase to house and protect a 55″ Promethean ActivPanel  incorporating height adjustable RF controlled Rams, integrated laptop shelf, laptop storage and integrated PDU powering the case, laptop and any additional peripheral devices all housed within a small footprint suitable for transport to and from away games.

So as their honorary life President Sir Elton John would say no “Sad Songs”, just a winning signing for Watford FC!

Send us a direct email to enquiries@av2events.com