LATEST NEWS
You are here: Home / LATEST NEWS / News / And the AV News AV Support Professional of the year goes to…..

On the 9th February I was lucky enough to be named the ‘AV Support Professional of the Year’ by the annual AV News Awards at ISE in Amsterdam. Truthfully, the news is still sinking in. For a start I didn’t think I would make the awards ceremony having spent the previous twenty-four hours travelling across three time zones, continuing on from my support of the World Government Summit in Dubai.

I have been in the AV industry for the best part of 14 years now, 19 if you include the early years in telecommunication working for a now defunct Marconi Plc. In this time I’ve developed a strong ability to lead and motivate a team through partnership rather than delegation, ensuring we secure the results the client needs time and time again.  The success of the team boils down to the commitment of always adding more value than anyone else, this coupled with the objective to deliver a world-class level of service and keeping communication with our customers paramount has led to establishing satisfied clients around the World.

On an independent level the role of an AV tech requires working unsupervised for many hours, often working under pressure to meet strict deadlines whilst still maintaining the ability to think fast on your feet from task to task. A key attribute lies in having a thorough understanding of the client’s hardware and software offerings and being able to adapt fast when faced with unforeseeable and adverse situations.

So to be awarded AV Support Professional of the Year provides testament to the many other AV professionals in the industry that if willing to put in the work, week in week out, it really doesn’t go unnoticed and in an industry full to the brim of professionals going that extra mile can make the biggest difference.

My award focused in particular on the work I have been doing with Promethean as its lead AV support partner for well over a decade. I have worked closely with Promethean since 2003 and for the past year alone I have been working alongside the UK Channel team, providing both UK and on occasions International AV support. An area in particular that has seen a huge spike in demanded for AV support over the past twelve months has been the UK corporate sector.  During this time I have been working with Paul Dean, Head of Corporate and Government Business who has very kindly put some words together in tribute to the service he personally receives on an ongoing basis.

“There’s a big difference between an interactive panel just being installed and the support service which Lee Wilson provides. His attention to detail and customer care mean we trust him implicitly to act on our behalf on-site with any customer – and he has had to hold his own with some pretty prestigious names.” 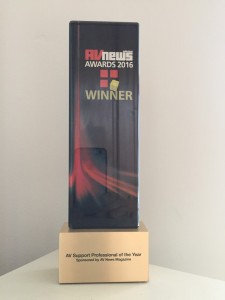 I’d like to thank Paul and everyone else I have had the pleasure of supporting over the years, not to mention their own continued support in helping AV2events becoming a recognised partner in the AV support industry, with confidence I wish you all the success for 2016 and beyond.

Its a HDBaseT world…And AV2events are the Guardians of its Galaxy!
Scroll to top